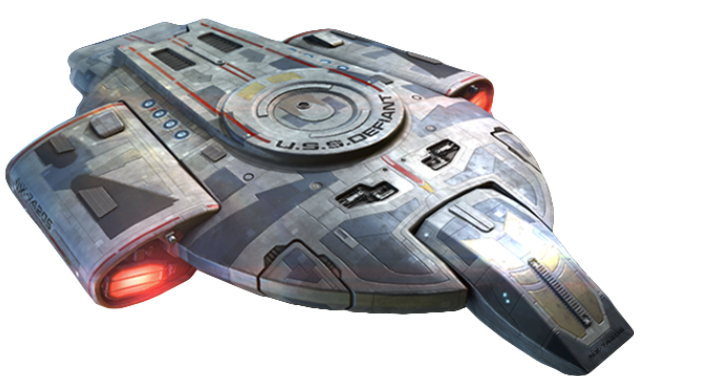 The USS Defiant was conceived as a prototype vessel to counter the Borg. One of the selected few that contributed to its design, was non-other than Benjamin Sisko.

The USS Defiant is truly unique as, unlike most Starfleet ships, it is built for combat rather than science and exploration.

How can you add it to your fleet?
To build the USS Defiant, you need to have your Shipyard at level 35 and prove to the Bajoran people that you are loyal to the cause! Once you reach the Militia level in the Bajoran Faction, you will be able to see a bundle that will contain USS Defiant blueprints.

Additional blueprints can be found in the missions Gambit Part 10, The Defiant Part 1 and Part 5. You can also get a full unlock through the Offers tab.

Why should you build it?
The USS Defiant addition to your fleet will provide you with the below advantages:

- Increased strength Vs Jem'hadar Solo Armadas
In the Bajoran Faction store there will be a Favor that increases the Damage and Reload chance of the USS Defiant Vs Solo Armadas. The Favor's name is Defiant Weaponry and can be claimed while tiering up your ship.

- Increased amount of Edict tokens
Edicts can be used to purchase Edict Bundles in the Bajoran Faction store which can then be redeemed for Bajoran credits and Diplomacy tokens.

Abilities
The USS Defiant has two abilities, a passive and an active one.

The Resourceful Approach (passive) will increase the Edict rewards from Solo Armadas by X% when using the USS Defiant (the % will increase based on your Ship level).

The Ablative Armor (active) will boost your allies' strength vs Group and Solo Armadas. To activate the ability, you'll need to spend Ablative Amplifiers which can be found in the Bajoran Faction store. This ability has a cost, duration, and cooldown. Both cost and duration will be improved while you upgrade your Ship level.

When you are being reinforced by another USS Defiant, you can further improve that reinforcement by researching the USS Defiant Solo Armada or Group Armada nodes in the Starships Research tree.